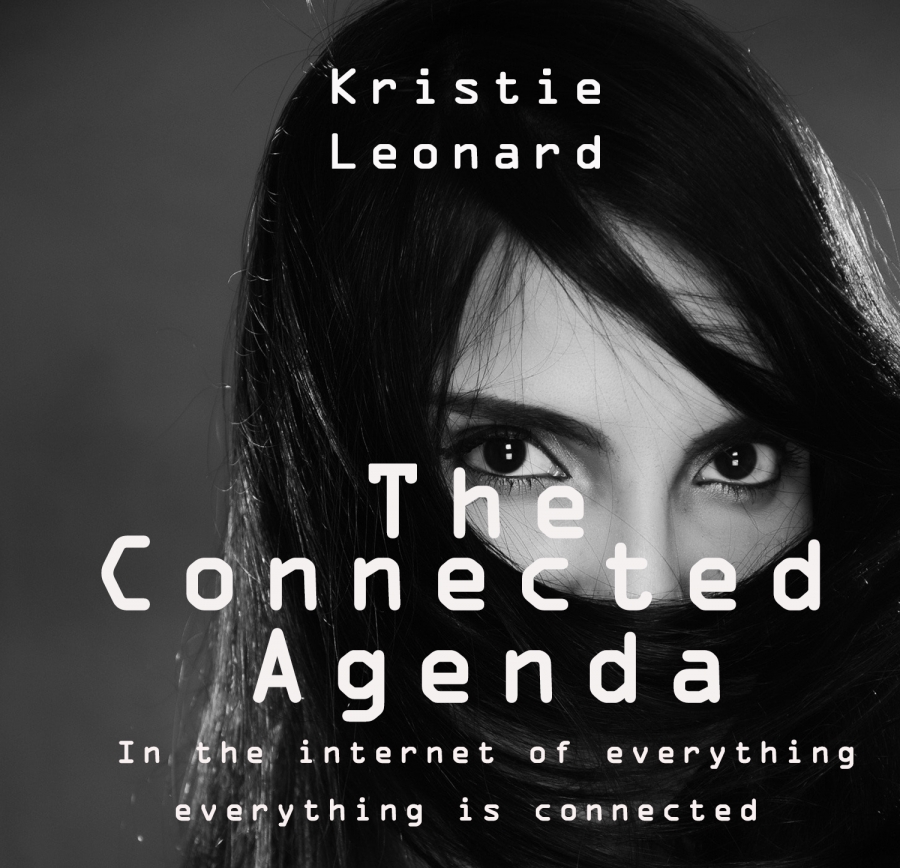 Kristie Leonard's new high-tech thriller The Connected Agenda, Episode 2 is now available. If you missed Episode 1, it's still avilable here.. The story involves artificial intelligence, chatbots, big data, and all the topics we discuss on Big Data Analytics Tech Brief - but in a more entertaining way. Follow Kay Whatley as she uses her cyber skills to defeat threats to her friends and discovers her family's link to the Austrailian hacker gang from the 1980s - The Realm. The first episode is available now and Kristie will post a new free episode every week for the next few months. Read Episode 2 below.

"How's Will?" Bryce asked about Kay's on-again, off-again boyfriend as they walked down the main street in Leland, heading toward Bryce's favorite haunt - the shoe store. A trip to the salon or anywhere else tuned into a visit to the shoe store. Bryce couldn’t get enough of the place

"Will rocks my world.” Kay pushed a chunk of her raven hair behind her ear that had fallen out of its topknot perch. “Most of the time. Sometimes my work gets in the way and Will has a hard time. He doesn't like to be second to anything."

"I know, right? It's good to keep in mind before I let things get too serious. I'm in no hurry. I've always planned to freeze my eggs, which gives a woman more time to get established on a chosen career path. Women aren’t supposed to be passed over for promotions and shit because they get pregnant – but it happens. Kay said.

"Let's cross at the light because Walk is coming up on the left. I remember when mid-day was busy with people running to lunch. Now everyone gets meals delivered, but I like it because it makes shopping easier." Bryce opened the door to the swanky shoe boutique.

"Speaking of delivery, did you see that two drones crashed, fell on a home and started a fire."

"No, but it doesn't surprise me. Those things are supposed to be foolproof, but hackers amuse themselves by causing shit to happen. Was anyone hurt?" Bryce asked.

"No. The article had some click-bait headline and I fell for it. I think it was a minor fire. It's not like the house burned to the ground." Kay's phone chimed. "It's Will. I'm going to bounce out of here for a minute. You take forever to choose your footwear, so come get me when you're done."

"I want you to help me choose," Bryce complained.

"Send me a pic. I'll be on the bench outside," Kay said as she pushed through the steel and glass door.

Will was at his desk eating a burger for lunch. He was wearing a shirt and tie, which was required at the office. "What's up gorgeous?”

"Shopping with Bryce who just quit her job by the way," Kay said. She didn't feel gorgeous because she hadn't even bothered with lipstick.

"That doesn't surprise me. Bryce isn't the 9-5 type. We should celebrate her. unemployment tonight at Captiva. A ton of people from school are going to be there, as they are most Wednesday nights. Barbecue is half off and it's sick," Will said as he chomped his burger and ketchup ran down his chin.

Will was the office manager at a doctor's office, which was a position with no upward mobility. He wasn't really interested in healthcare, but he was organized so the job was a good fit. He returned to Leland after attending college in Southern California. Most of his friends headed up to Silicon Valley but Will returned home. He didn't come back for Kay, but that may have had something to do with it. They hooked up a few times in high school and during school breaks when he came home. Since he came back to Leland, it had been Kay and Will 2.0. She was much more comfortable in her skin in her 20's than she was as a teenager. Kay was athletic and smart, but she wasn't exactly a social butterfly. She wasn't obsessed with the latest in pop culture and did little to conform. Will never asked Kay to change, not as if she ever would. Will liked that Kay danced to her own soundtrack because it made her unique and appear confident. Confidence, Will always said, was sexy. She and Will always had good sex and the older they got, the better it got. Neither Kay nor Will seemed bothered by the fact that fucking was the foundation of their relationship.

"Sure, you're going to have an appetite after that burger?" Kay joked.

"I'm sure Kay. When have you known me to pass up cheap food? I have a meeting in 15, so I'm hanging up. Gotta change my shirt and I always bring an extra because I'm a slob. Tonight Captiva at 8 o'clock. Out."

The screen went black and Kay shoved her phone in her pocket. Bryce hadn't come out yet, so Kay went back inside. Bryce was finishing up her transaction with Plume Pay, so she found a pair of sandals. She flashed Kay a picture of her purchase.

"Cute, when will they arrive?" Kay asked.

"They should be there by the time I get home, as long as the drone doesn't crash." Bryce laughed. "What did Will want?"

"There's a thing at Captiva tonight with a bunch of people from school. He'll be there around 8, so let's call our peeps and make a night of it. You can wear your new sandals. I'll drive if I remembered to charge my car. Otherwise, I'll call a DV (Driverless Vehicle)."

"Do you know if Chip is going?" Bryce asked.

"I assume he'll be there. He always comes to college-related shit. I know what you're going to say and I'm on it. Jade will be the first call I make because of her insufferable crush on the guy. I don't get that because I see nothing spectacular about Chip, but then again – it’s Jade and Chip has money."

"Maybe Jade thinks of him as a blank canvas. Someone she can turn into whatever she wants."

"I guess. Bryce, what the hell are you drooling over?" Kay noticed Bryce staring in a shop window.

"The Plume Z725. They say it's the closet Plume has come to a holographic phone."

"That thing is full of bugs and it's about $6000. Wait and it'll come down like everything else. Maybe you'll get one with your next job."

"Not if I'm a bartender, Kay. I'm not on a hot career track like you, but I'm happy. Although I'd be happier with the Plume Z725."

Kay laughed and kiddingly jabbed Bryce in the arm. They arrived back at Bryce's Condo just as her sandals flew in from the local DC. Kay walked next door and pressed her index finger on the pad as she picked up her quinoa salad waiting for her on the steps. Kay walked into her office. "HR, calling in." Kay's phone was set to receive work calls the moment she stepped in her office. She threw her phone on her desk as she noticed her red incoming button blinking.

Read the rest of this episode.